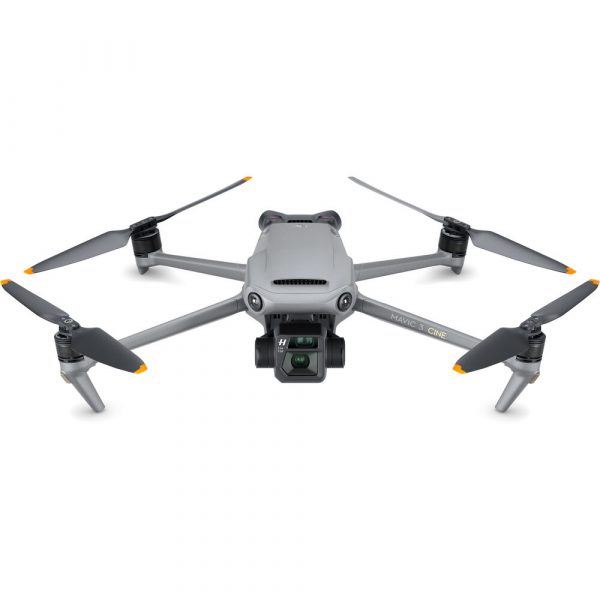 DJI has unveiled the Mavic 3 and the Mavic 3 Cine, its latest prosumer drones with two cameras, and great improvements for photographers & filmmakers. We then have a new 50mm lens from Samyang, the Pepsi Polaroid, and much more. Here’s the best news I’ve selected for “The Photography News Show”!

DJI has unveiled the Mavic 3, its latest prosumer drone that blends the capabilities of the Mavic 2 Pro and the Mavic 2 Zoom while improving in every aspect. The Mavic 3 comes in fact with two cameras!

The main one is developed in collaboration with Hasselblad and it’s a 20-megapixel 4/3 CMOS sensor capable of shooting 5.1K videos at 50fps and 4K up to 120fps. The 4/3 sensor size is a dramatic improvement from the 1-inch sensor of the Mavic 2 Pro. It’s something unseen on drones of this size and gives 12.8 stops of dynamic range.

The lens mounted on the primary sensor is a 24mm with an adjustable aperture from F2.8 to F11. And in case 24mm is not wide enough, DJI also developed an accessory wide-angle lens converter, with which you’ll get an equivalent focal length of 15.5mm, with a Field Of View of 108°. The other camera comes with a 12-megapixel  ½-inch sensor and a hybrid zoom up to 28x, with an equivalent maximum focal length of 162mm and an aperture of F4.4. The quality is surely lower than the main sensor, but with this secondary camera, you will be able to capture long distant subjects and get new perspectives.

One of the crucial aspects of a drone is its flight time, which is determined both by its drag coefficient and the battery. DJI completely redesigned the Mavic 3, improving the wind resistance by 35% compared to the Mavic 2, which together with the improved motors and more space for the battery, translates to 30km of flight distance per charge and a maximum flight time of a whopping 46min, a 50% improvement.

Having a long flight time is awesome, but that means also more chances of crashing into something. Just a few years ago, drones didn’t have any kind of sensors to detect obstacles – and that’s why we can find a ton of drone crashes videos on YouTube. Technology has constantly improved since then, and the great news is that the Mavic 3 brings Omnidirectional Obstacle Sensing, meaning that it can sense obstacles from any direction, even when moving sideways and backward. This directly improves the ActiveTrack, which will be able to track your subjects in challenging scenarios without having to worry about anything, and when your drone will need to return home, it won’t risk crashing either.

Besides the Mavic 3, DJI also introduced the Mavic 3 Cine. It basically is the same exact product, with a major difference. The Mavic 3 Cine is, in fact, capable of shooting 5.1K video in Apple ProRes 422 up to 3,772 Mbit/s. A normal SD-Card wouldn’t be enough to capture such a high bitrate video, and that’s why the Cine variant comes with an integrated 1TB SSD, while the standard Mavic 3 only has 8Gb of integrated storage.

This drone surely is a great step up for the industry, and as expected, that translates into a step up for prices too.

It’s, in fact, the second generation of its original 50mm for Sony, and it brings interesting improvements. First of all, it weighs only 420g and it’s just 3.5-inches long, making it the smallest and lightest lens of its category for Sony E. It has a focus hold button and a custom switch that changes what the focus ring does. In mode 1 it changes the focus, while in mode 2 the aperture, something that might come in handy in some scenarios.

It features weather sealing across several points and you can grab it for $750.

As you’ve seen from the last show, Nikon has recently unveiled the Z9, and apparently, it was a big success. Some rumors are reporting that there have been 400,000 pre-orders, which seems a bit too optimistic in my opinion. In the meantime, Nikon stated that the initial production volume is planned to be around 35,000 units per month. So it might be some time before you can put your hands on this camera.

Talking of Nikon, during the Z9 launch event, the Japanese brand also announced two new apps. The 1st is called NX MobileAir. It will be released at the end of November, and it will let photographers send pictures directly via FTP using 4G or 5G connectivity. The cool thing is that you can write several metadata, including a voice note, and this will be very useful for sports and events photographers. The app is free up to a single album below 1,000 images, while for unlimited FTP transfers you’ll have to pay $4.99 per month.

While the other app is called NX Tether, and it’s the latest tethering software that supports also Wireless connection.

500TB of Storage in the Future

What if you could have up to 500TB of storage in a single disk?

That’s not science-fiction, but it’s actually a new high-speed laser writing method developed by the University of Southampton in the UK, that can store so much data onto a single sheet of glass.

It will surely take some time for this technology to make it to the consumer world, but the future looks exciting, and hopefully, we’ll soon not have to worry anymore about having enough storage space. If you’re interested in learning more about this, you can find here the official research paper and the press release.

David Doubilet – Two Worlds: Above and Below the Sea

This week I have for you some photos from David Doubilet, a pioneer of underwater photography. He has released a photo book called “Two Worlds: Above and Below the Sea” where we can see pictures that blend the terrestrial world with the underwater one. I can only imagine how much work goes behind creating images like these, especially in challenging conditions such as when shooting in Antarctica, and I find it fascinating to think that 80% of the oceans are still unexplored.

The imaging world can be at times weird!

This week Pepsi has released a new version of its own Polaroid.

It uses refurbished components taken from Polaroid instant cameras, packaged into a Pepsi-branded exterior. It retails at $160 and it can be an expensive throwback to the good old ’90s.