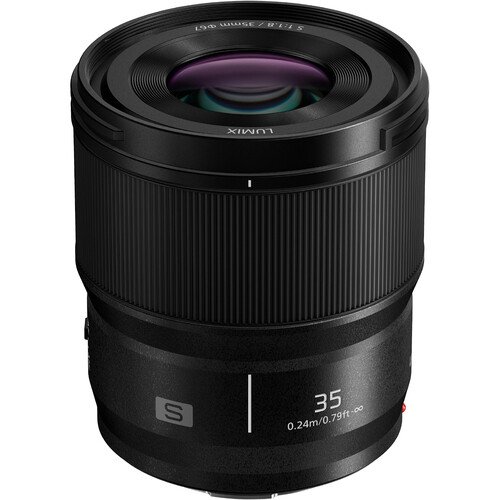 Panasonic has unveiled the Lumix S 35mm F1.8 lens, its latest large-aperture prime lens for full-frame L-Mount. We then have a modular lighting system, a beta feature from Instagram, and much more. Here’s the best news I’ve selected for “The Photography News Show”!

The Panasonic Lumix S 35mm F1.8 is a new lens for the Leica Full Frame mount. The optical structure comprises 11 elements in 9 groups, and it’s very light and compact, weighing only 295 g (or 10.4 oz).

It has dust, splash, and freeze-resistant design, and it has features that make it very interesting for video shooters. For example, the focus can be changed linearly, and you can even set the amount of operational rotation, from 90 to 360 degrees, which will be useful for optimally pulling focus.

Talking of focus, Panasonic states this lens doesn’t have any focus breathing, which will surely make filmmakers happy. I personally am a fan of the 35mm focal length, as it provides that medium-wide look that is suited for a wide variety of scenarios.

The Lumix S system is growing rapidly, and it now has an interesting range of bright prime lenses: the 24, 35, 50, and 85mm. What’s very interesting to note, is that all these lenses have a very similar weight, the same center of gravity, and the same front filter size of 67mm. This will dramatically facilitate operations for filmmakers, as it will make changing lenses on a gimbal a breeze, something that normally requires a complete rebalance of the system.

Just a year ago Nikon experienced a profit loss of a crazy $720 million, but thanks to the new cameras released this year, together with the improvements in the pandemic situation, it’s expected to close the upcoming financial period with over $100 million in profits. The Japanese brand already has a clear idea of what to do with some of that money! In fact, it has announced the construction plan of the New Head Office in Tokyo.

It’s expected to have 6 floors, with a total space of 42,000 square meters, and with an emphasis on sustainability. It will be built on the premises of Oi Plan in Shinagawa-Ku starting in Summer 2022, and it will be completed by Spring 2024.

Lights are a great tool to expand the creative possibilities, but they often are bulky and not super versatile. That’s bound to change, thanks to the Aptolux MP-1, a portable, lightweight, and modular lighting system. The kit is composed of 6 panels that can be arranged in several shapes to perfectly suit your needs, and the company defines it as “the Swiss army knife” of video lights.

The cool thing is that once disassembled, the modules can easily fit in a bag, making this a convenient system for small productions. I personally hate bringing big lights around, and a solution like this would make my life easier. There are several kits available for pre-orders, with 2, 4, and 6 lights, from 300 to $850.

This week I have for you a series of images from Remembering Wildlife, a fundraising photography organization.
Everyone loves dogs, but not everyone knows of the African Wild Dog. In fact, it’s close to extinction with only about 6,600 adults left, and it’s one of the most endangered mammals on Earth.

To raise awareness on the topic, and raise money to protect them, Wildlife Photographers United has created the Remembering African Wild Dogs photobook.

That’s actually the 6th book of the series, as the organization has previously released 5 books on other animals at risk: Elephants, Lions, Great Apes, Rhinos, and Cheetahs.

The organization has donated over $1.1 million to 54 projects across 24 countries, and if you want to support it, you can buy one of these beautiful photobooks.

Social media are getting always more addicting, with a daily average use of 2.5 hours. Companies surely don’t mind that, as it equals more money for them, but interestingly enough, Instagram has begun testing a new feature called “Take a Break”, where you can have Instagram remind of you stepping away from the app after a set period of time.

There surely are more effective ways to reduce social media usage directly from your phone, but I appreciate Instagram testing this feature and I hope it will be rolled out to every account so that we can all be more conscious about scrolling.

As I’ve mentioned at the beginning of the show, Lumix S shooters now have a great prime lenses lineup available, but there’s something missing on the wide end. And that’s why Panasonic has announced that it’s working on an 18mm F1.8 lens that will complete its L-Mount lineup.

It’s unclear when it will be released, so, let’s wait and see!