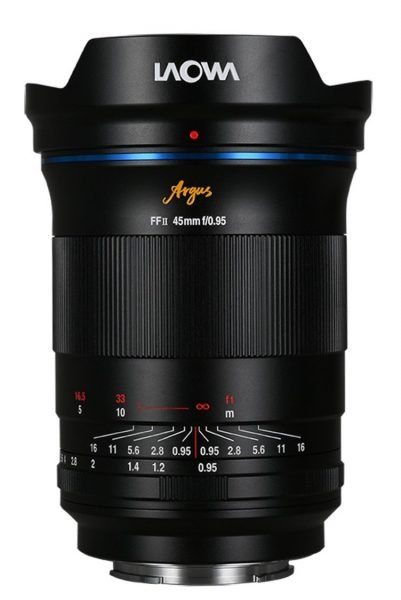 Venus Optics has unveiled a new lens in the Argus lineup, the Argus 45mm F0.95, a fully manual lens ideal for achieving a dreamy look in your photos & videos. We then have the TTArtisan 90mm F1.25 for different mounts, a Leica camera made of LEGO, and much more. Here’s the best news I’ve selected for “The Photography News Show”!

Back in September, Chinese manufacturer Venus Optics had announced the Laowa Argus 35mm F0.95, the world’s fastest full-frame lens, which I’ve covered in Episode 18 of the show. And just a few months after, there’s a new lens in the Argus lineup, the Argus 45mm F0.95.

It has a full metal construction, and like all Venus Optics lenses, it’s fully manual, so it comes with a focus ring, a focus distance scale, and an aperture ring. Talking of which, it can be de-clicked with a switch, something that will make filmmakers happy.

It also has internal focusing, low focus breathing, and a 300° focus thread, all features that make it ideal for videography. Still, this looks like a great choice for photography as well. 45mm is a very interesting focal length as it’s pretty similar to the human eyes perspective, and it’s a way in between the most famous 35mm and 50mm, making it suitable for several applications.

But of course, given the fast aperture, the Argus 45mm is optimal for portraits, both environmental and closeups, where you will get a dreamy look together with creamy bokeh. And thanks to the crazy fast aperture, you’ll be able to easily shoot in very dark conditions. Looking at the sample photos, which you can download too (JPG and RAW), the Argus 45mm F0.95 is sharp at the widest aperture.

Distortions and aberrations seem to be controlled very well, thanks to the use of 1 Aspherical Lens,1 ED glass, and 3 UHR glass.

It’s available for Sony E, Canon RF, and Nikon Z, and coming at $799 this could be an interesting lens to start 2022 with a new creative perspective, and you can grab it from the official website at this link.

The other lens that was announced this week is the TTArtisan 90mm F1.25.

That’s actually not a “new” lens, as it was announced back in May for Leica M, but the lens comes now in 6 different mounts: Sony E, Canon RF, L-Mount, Nikon Z, FUJI GFX, and Hasselblad X1D.

I actually own the Leica version of this lens, so I will give you all the details in my upcoming review, but in the meantime, I can tell you it’s a very particular and interesting lens. TTArtisan goes for a slow approach to photography, kinda old school. In fact, focusing manually with this lens is not a piece of cake, as the depth of field you get at F1.25 at 90mm is ridiculously shallow, but at the same time, if you nail focus, you get a beautiful dreamy, kinda 70’s, look.

You probably don’t want to get this look on all your shots, but when needed it’s surely interesting. On top of that, you also work on your biceps when you shoot with this, as it weighs 1Kg. It has 4 sets of Achromatic Doublets that greatly reduce chromatic aberration, and the lens cap can be converted into a lens hood, which is a nice design touch.

The downside is that it doesn’t have a chip to transmit EXIF data, but coming at just $499, this can be an interesting lens to have in your creative toolkit, and you can grab it from Amazon.

The 1DX Mark II Was the Last Canon Flagship DSLR

2021 was the definitive year for Mirrorless Cameras, with Nikon and Canon finally joining the flagship mirrorless party with the Z9 and the EOS R3. How about DSLRs? This week Canon has confirmed that the 1DX Mark III was its last flagship DSLR camera, and that doesn’t come as a surprise seeing that the future is mirrorless. I’ve been shooting mirrorless since 2014, and I’ve always been a big believer in this technology.

I also have for you a concept for a 1950 Leica IIIf LEGO camera created by a hobbyist LEGO designer.

The project is very precise and complex, as it’s made of 586 different pieces, and it includes a lens, finder, caps, as well as a box, and a display stand. It looks way better than the LEGO Leica M camera sold back in 2018, and hopefully, this designer will get the project reviewed by LEGO itself. If you want to help with that, you can vote for the project at this link.

In this segment, I feature the most interesting pictures I’ve seen on the web! This week I have for you an amazing discovery announced by researchers at the European Southern Observatory, who have spotted at least 70 rogue planets in our galaxy.

This has been possible by analyzing data collected over 20 years from telescopes around the world. These planets have masses similar to those of the planets in our Solar System, but the difference is that they’re not orbiting around a star, but they just roam freely. Besides the super-cool zoom of the video, this is an important step towards understanding the origins and features of these planets, and ESO’s upcoming telescope, the ELT (short for Extremely Large Telescope), will be finalized in 2027 and will be crucial to gather more information on these newly found rouge planets.